When the shooting stops...

I was reading this excellent book recently all about the art of the film editor. It’s an interesting account of one man’s career. It spans a fascinating time in filmmaking and covers in detail the making of some famous and significant films. 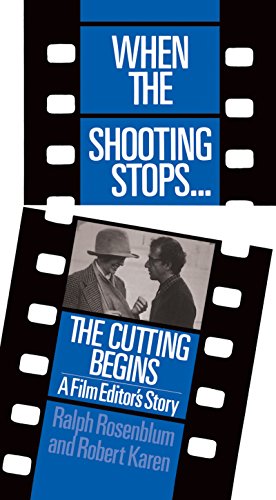 It is an insight into a job and into a part of the film industry that I knew little about and there was one part which particularly struck a chord with me.

In the early days of film, things were different. If a film-maker wanted a character to go from their home to their office they would have lead the audience through the sequence bit by bit. Starting with them in their apartment. Then going out of the front door. Next showing them getting into their car. Then a shot of them driving. Then getting out of their car again. And finally entering in their office building before finally walking into the office.

This laborious telling of each part of the story was necessary to help audiences understand the action. They weren’t used to the way film cuts worked and may have got lost as the film progressed from scene to scene.

At a certain point, audiences got more savvy to the way cuts worked. A similar sequence might start with the character rolling over in bed, picking up the phone and listening. The film would then cut straight to them walking into the office. By this time the audience understood the implicit language of film enough to fill in the gaps.

This new found knowledge on the part of audiences opened up new possibilities. Allowing filmmakers to explore a new type of rhythms in their films.

It struck me that in web design we have a similar situation around affordances. As times change and technology moves on, people adapt and learn about how those technologies work. New kinds of interactions become the norm. New affordances which would have been bewildering to previous generations become second nature.

Of course, when designing for a wide and varied audience we need to make sure that those with less experience are not left behind. A challenging film may still be a success in a way that a challenging interface definitely can’t.

Yet, I think it’s worth remembering that these things are always changing. People are learning all the time to take for granted things they’d have been baffled by before. This means that more than ever we cannot take for granted even the most hard-won experience of what users can or can’t use.

The task of learning about our users is never ending because our users are always changing. Unless we are in constant contact with the users of our services we cannot assume that we know what they understand or what they can or can’t use.

Expertise in this area is not a thing you can have and keep. It’s a process. A humbling process at that.