I was talking to someone about this the other day and it kind of came out OK so I thought I'd write it down. I'm pretty sure I've heard something like it before, I know the hammer / tools / interaction design thing has been done before. Still, here it is. 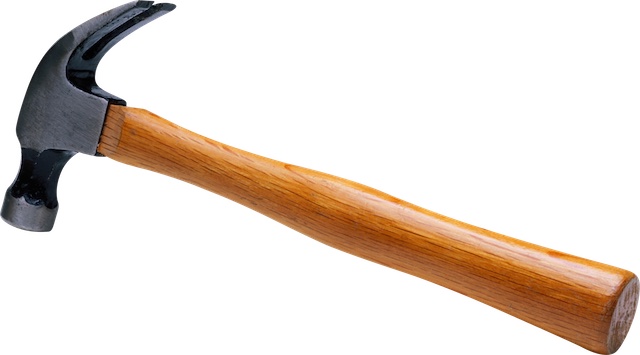 You know what to do with it, don’t you? You grab that lovely grabbable bit at the bottom and you swing it at a nail. The end is made of metal, and the weight of the thing almost impels you to swing it and whack things with it.

You don’t need long-winded instructions to use a hammer. If I provide them you’d ignore them. Quite rightly because you know what you’re doing. Naturally.

I use the word “communication” here deliberately. Designing a tool like this is an act of communication. The designer needs you to understand intuitively what you are able to do with the hammer. You are able to pick up these little cues and clues the same way you would understand it if they communicated to you verbally.

A tool allows the user to do something they couldn’t do without it; giving the user a temporary super-power. So it’s vitally important that the user understands and can fully utilise it. This is what interaction design is about. This act of design is really an act of communication. It’s a way of saying “this is what this tool allows you to do”.

One part of the language of interaction design is affordances. These are the things that people understand they can do. In the physical world that’s like handles you naturally know you can hold or buttons you can press. In the digital world, we have similar affordances based on the early skeuomorphic designs people created. Buttons, paper, scrolls, forms all made their way from the physical world to the digital. They took with them some of the affordances of their physical counterparts.

Another part of this language is feedback. These are the things that show users that they’re right or wrong about the affordances. Did the thing that you expect to happen actually happen? Does a change make sense or follow logically from the action you took? These too can take their cue from the real world (e.g. a button lighting up, a new element sliding in like overlapping paper) but they are also sometimes more natively digital.

This is why I love working with content designers. They are working for exactly the same purpose but just with different tools. It’s like you’re hacking away at the ground with a shovel and are suddenly joined by someone with a pick-axe. Your tools complement each other and you get your hole dug quicker. Also this is why content designers often are the best people to bounce interaction design ideas off. Whether we’re explicit about it or not the focus on clarity of communication is what we’re both interested in.

For an interaction designer, the challenge it to put this language together in such a way that the user understands the affordances and the feedback always aids that understanding. Users approaching the service need to understand what the possibilities are quickly and easily and so they are informed and empowered to make the best choices about what action to take.

Of course, there are cases where instructions are necessary, but only when a new interface represents such a paradigm shift that no person could expect to know how to use it without them. For example, the first time the triangle symbol was used for PLAY and the square for STOP on cassette recorders people needed instructions to understand. By the time the VHS or DVD was invented, people understood. The affordances established for cassette tapes transferred directly across. The language was established, and instructions were no longer needed.