Last week I went to a cross-government design meeting in the amazing North of England Institute of Mining and Mechanical Engineers building in Newcastle. Amongst the usual updates and talks about specific projects we heard from Brendan Dawes. 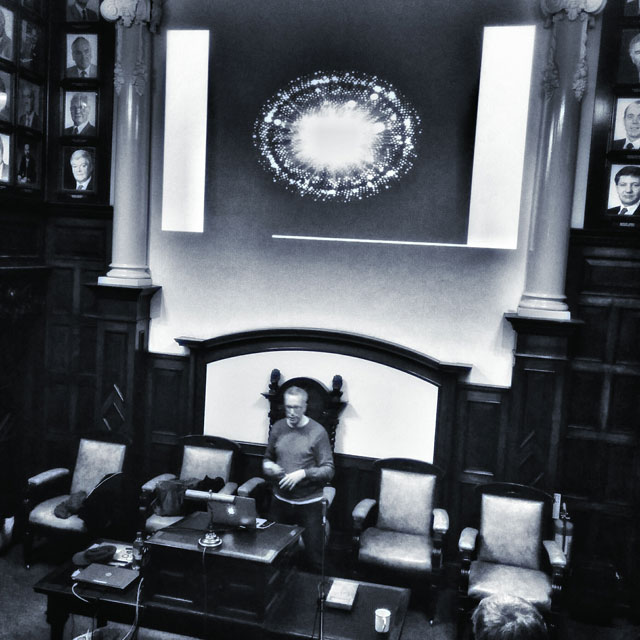 A successful designer with a flair for visually impressive digital artworks he seemed like a strange choice of speaker to a group of designers who, whilst no doubt having an interesting and important job on their hands, have little or no opportunity for the colourful, whimsical and playful flights of fancy that he tends to go in for.

Were they trying to bait us?

Maybe. But whilst pangs of jealousy were in evidence it was also interesting to see how much similarity there was between his individual practice and our group endeavours.

First his approach to work was clearly agile in all but name. Starting quickly. Prototyping something "ugly" which is “just there to be criticised” and improved upon. Moving quickly on. Ditching bad ideas and replacing them with better ones. Keeping the work fluid as far as possible.

Although he professed ignorance of agile there is a clear similarity there and really it’s not surprising to find a man who has carved a niche for himself in the digital world naturally utilising the key benefits of his medium in the same way that agile does.

More interesting for me though was the idea of his “digital cupboard”.

I remember Brendan Dawes from my Flash days. He used to create loads of cool little experiments online. I used to think: Where does he find time?

It's clear though that all those things (and no doubt more besides) now form a panoply of ideas, techniques, reusable doodads, that he can draw on and throw at any problem put in front of him. Combining, recombining and adding things to meet new demands. These are the contents of his digital cupboard.

Thinking about how great it would be to have such a back catalogue it struck me that this is actually the same thing we’re doing in government. When we share patterns and techniques; when we're attempting to create communities around specialisms. The aim is to solve future problems by combining the good ideas we've had in the past. Only rather than living in the head (and laptop) of a single man we need it to be shared across the collective brain of government.

One of the best tools for doing this kind of thing online is clearly a wiki. The brain-like structure of links and connections and the potential for a kind of organic growth and development makes wikis ideal for sharing and organising knowledge. Not surprising then that one if the main places we attempt to create this currently is on hackpad. It seems that soon the lease will be up on that particular tool and so what better time to be thinking about this in a new kind of way.

Maybe by thinking about how we can best create our own "digital cupboard" we can redefine what tools and practises best suit our needs in the future.

Communication is the only problem Links