Will it write? Showing up

So here I am sitting waiting for the oven to cook some fish and I was thinking how often I tend to regard writing a blog post as some kind of essay that I need to deliberate over and hone like a piece of homework which is why I rarely write anything.

UPDATE: this blog post mentions a couple of people about who personally I have conflicted feelings. It was written before some of the recent revelations, but that isn't really the point. My inclusion of both in here isn't meant to be an endorsement of them individually. I hope that it's still OK to mention the ideas I've quoted without it being seen that way.

Isn’t a blog meant to be more like a stream of consciousness which you are splurging out into a largely uninterested universe for no other reason than you have found yourself with a spare moment with nothing to do but wait for tea to be done?

No… blogs can be either of these things and what I’m doing above is more like setting out the two ends of a spectrum which I mostly sit in the middle of. Of course the need for quality drives us to try our best when splurging out things into the universe and so that means that we naturally want to take a little care over the type of things we write. On the other hand this blog is clearly not important, or paid for, or really read by that many people so the need for that level of quality (especially if is it slightly paralysing) is probably counter-productive.

Either way, sitting here with 19 minutes until my breadcrumbed basa fillets are ready. It made me wonder. 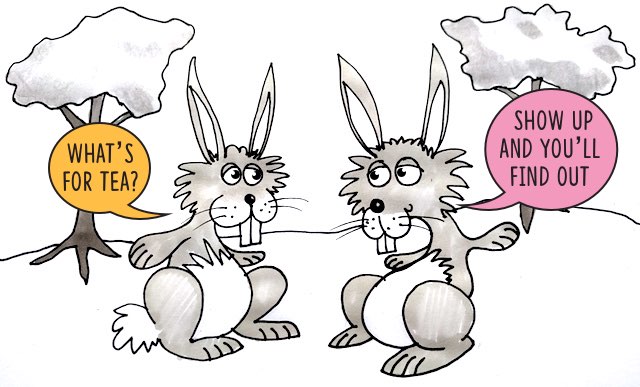 The comedian Louis CK, when asked about his process of creating material, used the phrase “will it write?” to describe the first test he puts an idea through when it comes to him. I like that. When I come to write something in this blog I’m often surprised by what will write and what won’t.

Ideas that I feel straightforward and simple will sometimes unpack themselves in front of me in such a way that writing about them feels like a hideous chore or like I’d be dragging the reader through a brier patch just to offer them a bean. Other ideas which seem fleeting and unthought out will suddenly drop onto the page in one go like a jelly from a mould fully formed and coherent (and occasionally rabbit shaped).

Maybe those are just the ideas I’ve stolen.

Perhaps I should give up on those ideas that “won’t write” and simply concentrate on the ones that will. I wonder whether that’s a better tactic or whether perhaps that’s exactly the wrong way to think about it.

I recently wrote a talk that started as an vague idea that I committed to give a talk about. Of course having the deadline forced me to write the thing and so I had (with this idea) to slog through the “it won’t write” phase and out the other side. I actually think in this case it was worth it and I got to a place which I wouldn’t have necessarily got to otherwise. That was a good feeling but it was also a real slog.

I’m currently trying to write that talk up as a blog post and it’s still a real slog. It’s definitely not writing easily and having given it as a talk I'm finding condensing and considering each word without the ability to hummm and errr my way through or leave sentences hanging means that I’m struggling to…

Woody Allen once said that 80% of success was just showing up (maybe he didn't). I think what this means is that actually so many people don’t show up, or take the easy route, that by choosing to work hard, to create, to care, you’ve already done almost the whole job. I’m not sure I agree. I think 90% of success is luck, but I do agree that showing up is vital. I guess the luck can’t happen unless you show up. I’m not sure how that maps to percentages.

Likewise if you produce nothing then the quality of what you produce is a moot point. I guess if you’re struggling even to produce something, then perhaps worrying about quality is stupid. So maybe we have to practice showing up with no regard to quality until we’ve really got the showing up bit down.

The question is: do you ask an audience, however small, to come with you through all this showing up on the vague hope that a some point you’ll have showed up enough to start worrying about quality? On the other hand if someone shows up and nobody one is there to see them fail does that count? Maybe the act of showing up is the act of stepping out from behind the curtain and making yourself visible.

I’m not sure whether any of the above justifies me writing this blog post and making it public.

Knowledge Entropy, Castles Made of Sand A Bicycle for the Mind