The Sneetches Isn't About Racism

In which I discover a three year old meme and get all pedantic about it as an excuse to write a long post about one of my favourite Dr Seuss books.

The other day I saw this page showing a load of Dr Seuss book covers where the underlying subtext was made plain on the front cover. It’s funny. Partly because these are children’s books and so the overly wordy and complex sounding titles jar the intended audience and partly because there’s a feeling of left-wing satisfaction that yes, those are the values subtly being imparted to children here and yes, the world is a better place for it. Hurrah!

Reading the list I was chuckling away to myself and then I found myself looking at the cover of my favourite ever Dr Suess book The Sneetches and Other Stories. I remember being read it as a child, and I now chose to read it to my kids at any available opportunity. So much so it’s become a bit of a running joke. Oh no, not that again.

Yes this again! It’s great. Shut up and listen or its early bedtime for you! 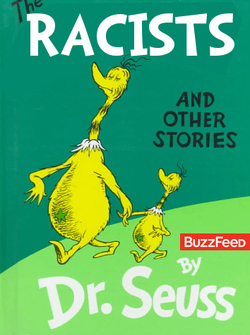 Yet looking at it’s treatment here I was surprised. Instead of the aforementioned overly wordiness this one was quite short “The Racists”. But that’s not what it’s about, I thought, and the more I thought about it the more it bothered me. I think because what I feel is going on in this book is much more complex than just “racism is bad” and actually that's why it's my favourite.

Yes, The Sneetches seems at first to describe a situation analogous to racism. Two very similar types of creature, separated by a small difference in appearance, live segregated lives because one set ostracises the other because of that difference. Some sneetches have stars on their belly some don’t.

Rhyming “stars” with “thars” as in “the plain belly sneetches had none upon thars” is probably my favourite example of Dr Seuss's brilliantly blase attitude to neologism in aid of making a rhyme work.

However, then “a stranger drove up in the strangest of cars” and this is where the story changes. This new guy is called McBean and he's an inventor, an entrepreneur and he has a solution. He has a machine which will put belly stars onto plain bellied sneetches thereby rendering the whole star-apartheid situation moot. In fact, rendering any comparison to racism moot. People can't change their race but here we have a character offering to allow the sneetches the chance to change. So could Dr Seuss really be taking aim at racism?

Now you may be thinking what a wonderful fellow this McBean is, helping out like this. But no, he’s not doing this out of the kindness of his heart he’s doing it for cash. So he charges the plain bellies five dollars a pop to go through the machine. Again you may think, fair enough, the man should be rewarded for his invention and his initiative, he’s still done a good thing.

But no. As soon as the problem is solved he creates it again by offering the use of a new machine to remove the stars from the bellies of those who “had stars at start” allowing them to reclaim their pole position in society by reversing the rules. “To be wearing a star now was frightfully bad”. Then having solved that problem he again turns the tables by offering the first group the chance to revert back to their non-starred state, again for a price.

“And then” Dr Seuss says “as you can probably guess, things really got into a horrible mess”.

The price keeps going up, the sneetches keep racing through, until all of their money is gone at which point McBean packs up and leaves. Laughing.

You see, if the story was about racism then the sneetches wouldn’t have been able to change, but by introducing that possibility Dr Seuss shows us that racism isn't his target here.

His real target is the kind of entrepreneurial consumerism which preys on the fears we have of being ostracised by our peers for exactly the kind of trivial reason found at the start of the story, and which then, by offering some supposed solution extracts our money, only to quickly move the goalposts and extract even more money as we try keep up.

The cosmetics industry, the fashion industry, the personal hygiene industry, the trainers industry, the car industry and maybe mostly nowadays the technology industry. Any industry that attaches status to something they're selling and which changes rapidly in order to keep demand high and keep consumers on their toes.

Dr Seuss in this book is taking aim at the very idea that people should be judging each other on what clothes, makeup, deodorant, footwear, car, or mobile phone, iPod, laptop, they own. He's showing how ridiculous those kind of judgements are and how they leave us open to being exploited by unscrupulous businesses who only want to profit from our insecurities.

It's a much more complex idea than simply “we should treat all people equally”.

This is why it's my favourite Dr Suess. He's managed somehow to condense one of the most tricky aspects of modern life, one which we all struggle with, one which if anything is getting worse as time goes by, into a brilliantly simple fable.

I want my kids to learn this lesson. I want them to recognise how ridiculous are most of the ways we differentiate ourselves from each other, but more than this I really want them to look out for and recognise characters like McBean.

In the end It's only when “every last cent of their money was spent” that the sneetches realise the error of their ways, and so in the end Dr Seuss makes it clear: money was at the heart of this story and it's moral.