Yesterday I took part in a BBC Connected Studio event at Media City, Salford. Connected Studios are one day events in which people from various digital industries are allowed to come to the BBC and spend a day with them generating new ideas around various BBC products and then pitching them at the end. There’s the chance to be invited back for a couple of days to build prototypes and even the possibility of your idea being made into a pilot (if you’re lucky!).

I went with Dean Vipond and we formed a little team. You could turn up with a bunch of people already or just go alone and hook up with other individuals on the day. The atmosphere was really friendly and supportive and there seemed to have been just as many hastily formed groups as there were people who’d come together.

They’ve already run a couple of these days on various topics, and have a few more in the pipeline, but yesterday’s event was based around the CBeebies pages on the BBC website. Both Dean and I have CBeebies age kids so it seemed like a good fit. We’d had a bit of a brainstorm before the day and had one particular idea which we thought we’d pursue. Only during an introductory speech by Patrick Healy and Rachel Bardill we discovered that our idea was already part of the roadmap!

To The Drawing Board

So we sat down and started running through what else we could think of. Luckily the thinking we’d done extended a little further than what they had already planned so we were able to go off at a bit of a tangent and explore some other areas.

There were some interesting short talks during the morning from various BBC people about the audience, the content and about some of the technology behind the site. We got also some advice about paper-prototyping and how to get the most out of the audience sessions (I’ll get to them). 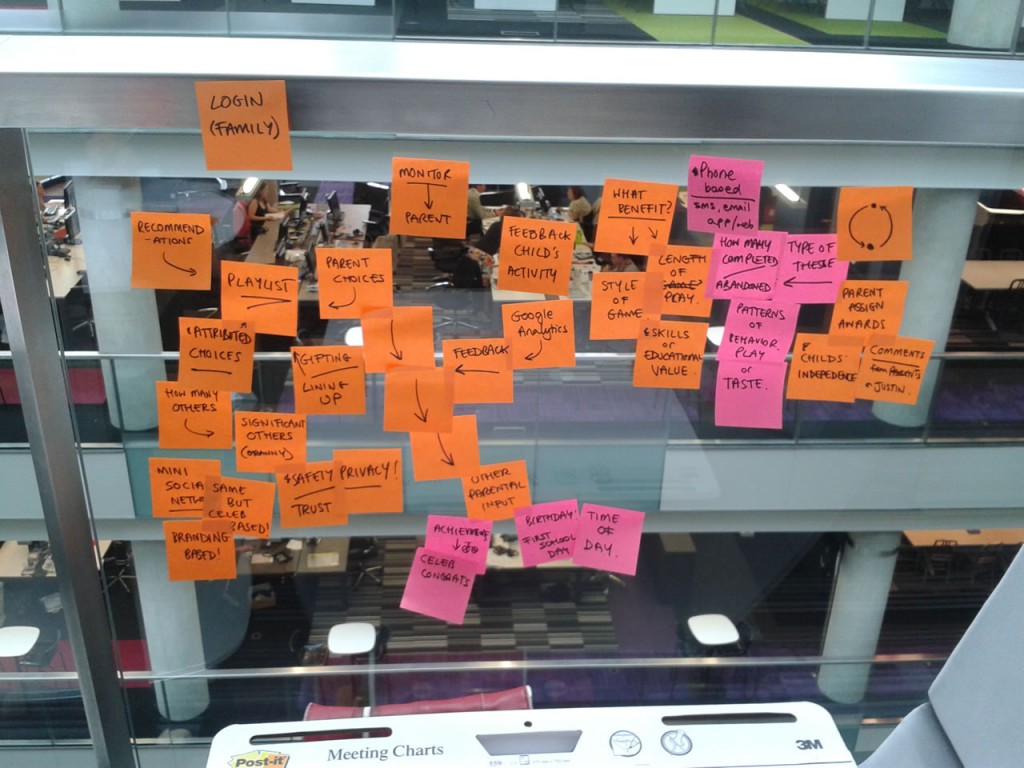 So then it was back to our little bit of space and out with the post-its. In the rush of our initial panic at “loosing” our idea we’d kind of just talked and talked without really gathering our thoughts to we spent some time writing everything down on post-its and pasting them across a nearby wall. This seemed to work well and we just about had enough time to condense this into a few sketches on a flip board when it was time for our audience session.

The BBC had brought in a small group of CBeebies parents who we could spend 15 mins with going through our ideas and getting some feedback. Although Dean and I are Cbeebies parents too, we were aware that we’re also a particular (and similar) type so we thought it’d be good idea to book a session. It turned out to be really interesting and as well as confirming a few things we thought, gave us at least a few completely new ideas to add to what we already had.

All of that went by in a flash but was good fun. Lunch was laid on so we were soon back in the canteen (sorry did I mention breakfast had been laid on too? hmmm sausages!) with plates of grub looking out at the spacious views past the Imperial War Museum and beyond towards Old Trafford.

Although we’d moved away from our original idea we were still floating around quite near to it so after lunch we collared Julie Aberdein (Development Producer) who was really helpful and basically confirmed that not everything we’d be talking about was already in development. This gave us a bit more confidence so all we had to do now was condense everything we’d been thinking about into a pitch that had to be no more than 2 minutes long. 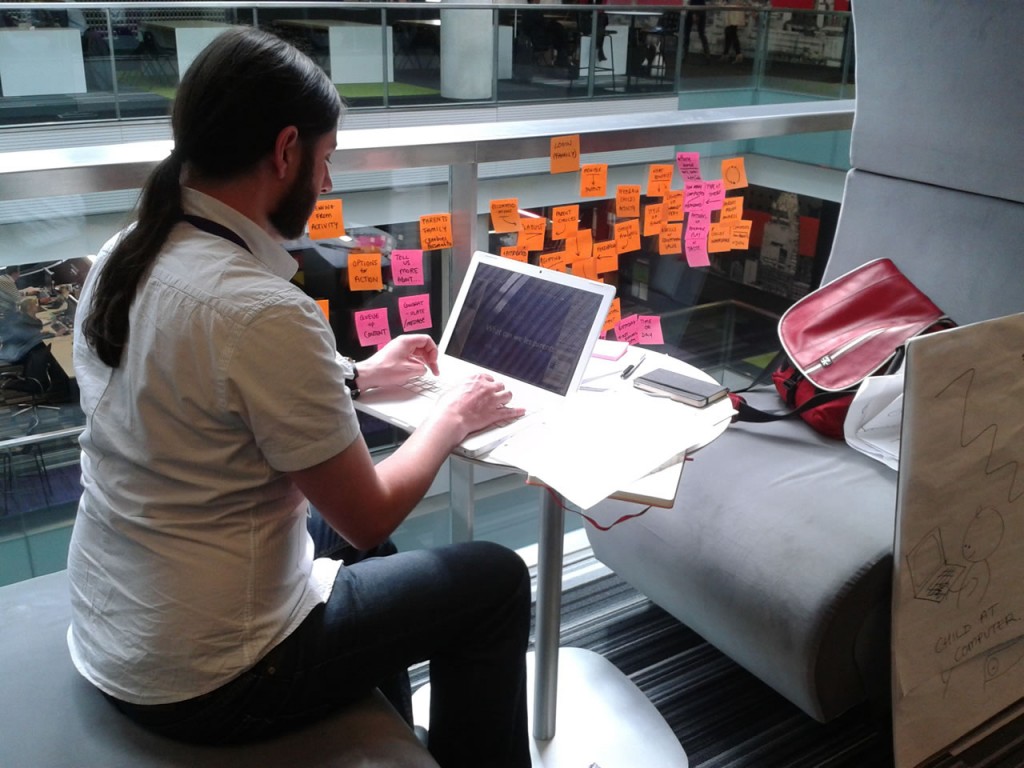 We managed to get it down to a fair size, produced small number of slides and got our flip board into the right order (not without some comedy Mr-Bean-with-a-deckchair shenanigans from me) and after a couple of toilet trips (that’s only one each mind) we found ourselves sat back in the main area along with all the other participants and a growing list of team names appearing on a white board in the corner.

We were number ten of thirty. This was actually quite good as we at least got to see a few people go before us but not so many that the nerves had got too much. In fact considering the number of people and the quality of work the atmosphere was such that it wasn’t the most nervous feeling. The timing was the worse thing because, as it seemed with everyone, the number of ideas people had were almost always impossible to fit into the time provided. It was quite amusing to see the variety of reactions to Adrian Woolard's "wind it up" hand signals.

The standard of ideas was really high. The amount of polish some people managed to get into their presentations was amazing. There was no rule about everything having to be produced during the day and so I can only imagine that some people took the opportunity to come for-armed with more than just a couple of brainstormed ideas. Which is fine, the breadth of styles and approaches was one of the most interesting parts of the pitching bit.

It quickly became apparent that there was going to be a fair amount of overlap between a lot of the ideas being presented. Initially there were audible groans as people realised that someone had pipped them to an idea but I think the sheer amount of overlap also meant that it quickly became accepted. As the pitches progressed it was interesting to play a game of mentally stripping back each pitch and considering the ways in which it was in fact unique. Whether that was through the details, the delivery or some of the background thinking being expressed. There was also a fairly sturdy game of buzzword bingo to be played – it’ll use HTML5! – but I suppose that’s to be expected with such a small time to speak and the need to appear not to have overlooked something important.

Another aspect which I found interesting was the amount of metaphors on offer. The thought to have wrapped up our ideas in some kind of metaphor and sort of branded it never occurred to me. I don’t necessarily think it was needed on a day like this but I have to admit in terms of a pitch it works brilliantly. Immediately afterwards and on the way home it was easy to speak about different pitches as “those were the water-slide guys” or “those were the space-station guys” (both made up BTW) which made a brilliant short-hand. As opposed to our “those are the guys where one of them wasn’t wearing glasses” which isn’t quite as memorable. (I say that but we cunningly threw in the “circle of life” at the end so I am being rather disingenuous).

Afterwards there was some drinks (bottles had been ruthlessly chinked throughout the pitches) and much chatting and I got to meet some really interesting people.

Generating ideas or innovations is always fun to do. Problem solving and attempting to get a bunch of ideas into a row so they make sense together and possibly form something greater than their sum is something I’d happily do all day. Having to do it quickly is good because there’s really no time to waste and having the pitch at the end adds an element of jeopardy which is always motivational.

I’m constantly surprised when doing stuff like this how much, although I know the theory, I end up either obsessing over tools and procrastinating and thereby missing some really simple but useful parts. It’s great to be thrown back into a situation which makes you remember stuff like that. I’ve vowed to give up searching for the perfect mind-mapping software and to just buy a set of post-its instead.

It was a really good day. A great mix of inspiration, help, support, some mild competition and just the right amount of adrenaline. I really hope we get through. I'll definitely be back for the CBBC one if I can.

My Delicious Bookmarks It&#8217;s been a long time baby