In 1990 Geoffrey Howe made a speech in The House of Commons which is credited with starting the process of removing Margaret Thatcher from her position as Prime Minister. 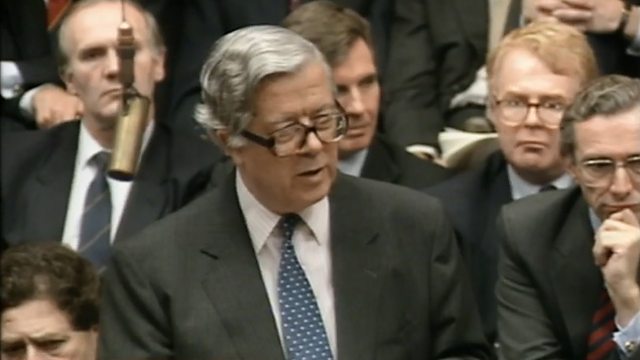 I was fourteen at the time (she’d been Prime Minister since I was two) so I understood what a momentous occasion it was. Also growing up in a household where Thatcher was reviled there may have been an extra impetus for me to pay attention.

The speech included this phrase:

“It is rather like sending your opening batsmen to the crease only for them to find, the moment the first balls are bowled, that their bats have been broken before the game by the team captain.”

Being perhaps a bit too uninterested to have paid attention to the nuances of what he was saying, it was that phrase I remember most. It was also probably the most media friendly soundbite which got it replayed often on the TV afterwards. Either way the idea of it is something that has stuck with me.

I remember it because it clearly conveys the idea and is memorably ridiculous to boot. Why would the team captain brake the bats of their own team? The opposing captain perhaps but not the batsmen’s own captain? How could you end up in the situation where that was possible?

Of course the team captain could have chosen to betray their team and have acted to sabotage them. Maybe, but I think that’s unlikely to be the case very often. It’s too dramatic. I think what’s more likely is that the team captain still thought that what they were doing was actually helping. In their heads breaking the bats was somehow the right thing to do!

How could they have ended up thinking that? Perhaps because their thinking had become detached from reality? Insanity had taken hold? Maybe. Again, I think reality is more mundane. I think more likely they had simply lost track of anyone else’s needs but their own.

I think the main reason that Thatcher was reviled in our house was because whilst she may have had a clear sense of how she felt the world should be run, her actions appeared to lack empathy for the lives of the people that those ideas effected.

It’s interesting to me that Geoffrey Howe seemed to be pointing out similar lack of empathy for those that she worked with (at least in this case).

If there isn’t a basic empathy between people at different levels of a company then those higher up are increasingly likely to make ridiculous decisions like this. It won’t be because of insanity or sabotage; it’ll be because somehow in their view these decisions make sense.

I try to remember this as a way to help me maintain empathy myself. Empathy for those people and understanding for what might have brought them to these decisions.

Sometimes though, empathy is hard.

Please note: I don't want you to think this is a veiled attack on an individual. There is no one "Thatcher" in my personal situation. The thing I was grappling with is that strange feeling of being sabotaged from somewhere above and attempting understand how and why that might happen.

The Sneetches Isn't About Racism When the shooting stops...