Stuck in the Mud

When you think about how you'd like work to be, what do you think of? It's Scooby Doo isn't it? Me too! Just look at this. 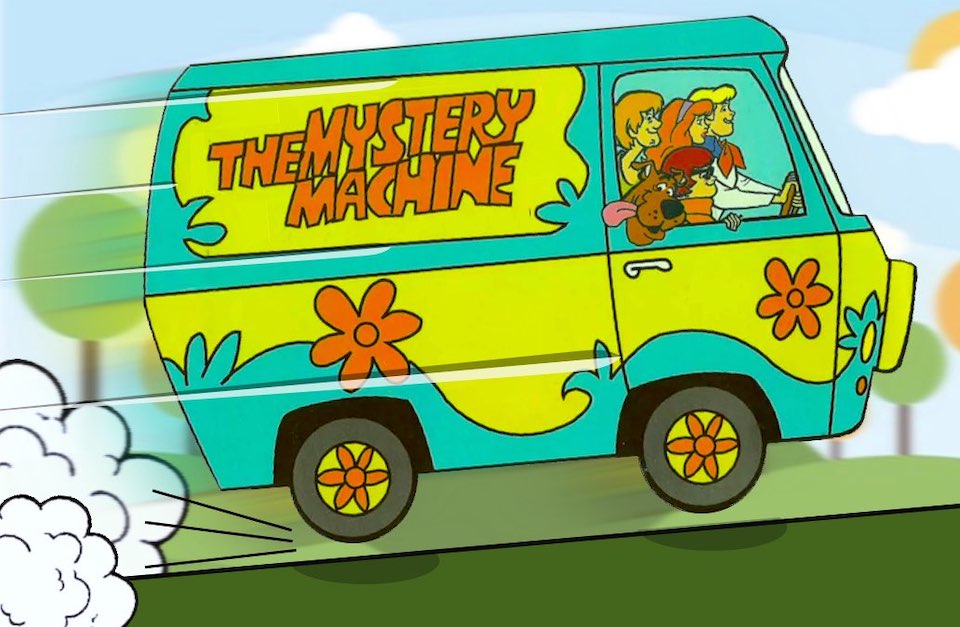 Wouldn't everyone want work to be like that? Whizzing along with a multidisciplinary bunch of buddies solving mysteries and eating large sandwiches. You may not always feel brave but, with your team alongside, you meet each challenge and still come out on top. You're even quite disruptive, continually meddling with the best-laid plans of (let's call them “evil") authority figures and uncovering the truth which is often expertly hidden behind convincing rubber masks.

If that’s how we'd want work to be, quite often though it's actually like this:

Things are stuck; the van isn’t moving; most of the team are out at the back pushing. We’re miles away from the next large sandwich and nowhere near accidentally happening upon a mystery to solve.

There are many reasons for this — you could probably list them — but either way, this situation means you aren’t able to do your job. You might be able to do bits, to tickle the edges of it, but without that forward motion, without that sense of travelling together into the unknown, the thing you do best (let's call that “solving mysteries”) is just not going to happen.

In this situation you have a choice; there are two things you can do.

You can get out of the van and start pushing with everyone else. It’s not your job, but you’re not a jobs-worth-type, you’re happy to muck in for the greater good. "We’re all in this together", you think, "and I’m glad to do whatever it takes to get the van back on the road".

It’s a genuinely worthwhile activity, but it's also back-breaking work. It can be tiring and demoralising to be pushing and pushing seemingly to no effect. Plus, all the time you’re doing that you’re not solving mysteries, which is what you love doing. All the time spent pushing the van (and trying to wedge twigs and sticks under the wheels) you’re not even thinking about solving mysteries, your mystery solving skills are stagnating. So you have another choice.

At some point (we have to hope) the truck will not be stuck. At this point, everyone will race back around to the doors and leap in whooping and cheering. The driver will put her foot down, the truck will lurch forward, and the wind will start to whistle through the windows. At this point, the same question will ring out on the lips of all involved.

“Where are we heading?!”

That’s right, the truck is moving again, but with all their exertions trying to get it unstuck no-one has been thinking about directions. Right now, it would be terrific if someone had a plan, a bearing, a target destination, or something like that. After all, you need to be heading somewhere right?

This is your second option. Thinking ahead to a time when things aren't stuck, you can scope out the landscape and start to determine where the best mysteries will most likely be found. You can think about what kind of mysteries they’ll be and think about what’ll be needed to solve them. You can look at the obstacles you’re likely to encounter and think of strategies to surmount them, and you can practice laying elaborate traps, leaping terrified into each other's arms and doing your victory chuckles.

The trouble is that this approach is an act of faith. There’s nothing really to say that the van will ever become unstuck and there’s no guarantee that even once it’s moving, you’ll be able to persuade people to follow your directions. So this work can feel speculative; it can feel detached from the reality around you. There will be no shortage of people to tell you that it would be better to get out and push. That can be hard.

It’s not that one approach is right and the other is wrong. What’s needed is a balance. Of course, get out there, put your back into helping to unstick things as much as you can, but also take a rest from that as well. Look after yourself and your interests and think about the work you want to do. Being a good team member is a vital thing, but being prepared for the next opportunity to grab the steering wheel might be even more critical.