A Bicycle for the Mind

Trying to express exactly what the attraction of computers is for me is hard, but the "bicycle for the mind" quote from Steve Jobs has always appealed:

“I think one of the things that really separates us from the high primates is that we’re tool builders. I read a study that measured the efficiency of locomotion for various species on the planet. The condor used the least energy to move a kilometer. And, humans came in with a rather unimpressive showing, about a third of the way down the list. It was not too proud a showing for the crown of creation. So, that didn’t look so good. But, then somebody at Scientific American had the insight to test the efficiency of locomotion for a man on a bicycle. And, a man on a bicycle, a human on a bicycle, blew the condor away, completely off the top of the charts.

As a creative person I’ve made computers my tool of choice. Luckily I’ve been able to make a career out of my use of them. For me, this puts the computer in the same category as the tools used by any craftsman. Just as carpenter might spend hours oiling the handles and whetting the blades of his tools, I want to be able to sharpen my own workflow. Shave off a few seconds here or a couple of keystrokes there.

And so not only have I learned to use computers and make them do things for me I’ve taken pride in my use of them. I’ve always been that person who’s customised all the things, who found out all the shortcuts and whizzy commands that save you time. I’ve always written little programs to help me do things and I've sought out and installed little programs built by people who have done the same.

Again the bicycle metaphor is apt. Anyone can grab a bike, jump on and take it from A to B. That’s fine. It’s wonderful. But if someone is really into cycling, if they do it professionally, you don’t expect that person to pick up any bike off the street and ride it. You’d expect that person to insist on a great bicycle and then to hone and tune it to suit themselves and the way they ride.

This is not just vanity or fussiness. It isn’t awkward individualism. It comes from a heartfelt love of the tool and an equally heartfelt desire to do the best they can with it.

In my life, I see too many instances where people who do need to regularly ride places are given bikes that are sorely deficient. Sometimes this is just because the bike is old or cheap (I understand this because money can be scarce) but sometimes bikes people have to use have been deliberately hobbled; broken to the point where asking a human being to try and ride somewhere on them something close to cruelty.

Being someone who takes pleasure and pride in riding, who enjoys the wind in his hair and the excitement of speeding down a steep hill, I find this dismal. 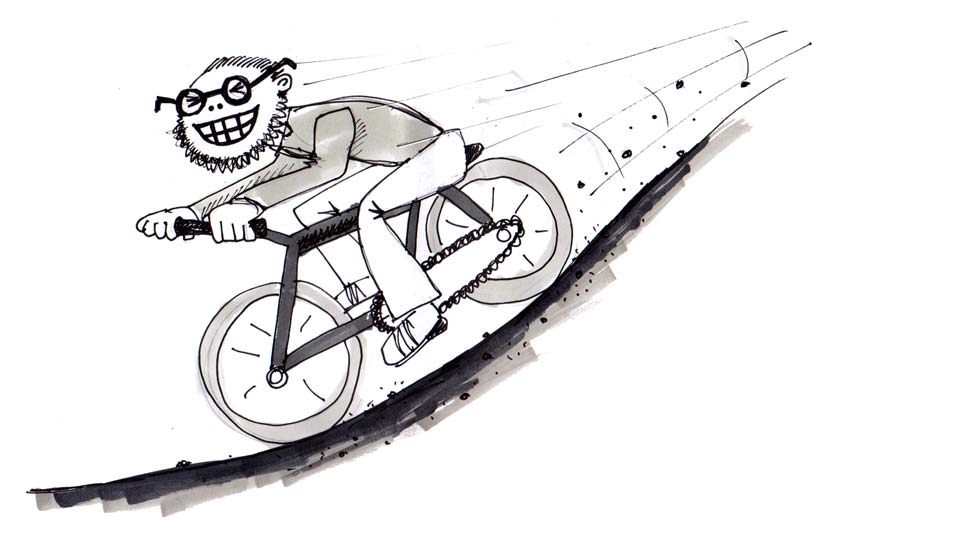 Imagine a bicycle where the safety of the rider had been prioritised so much that before starting to ride you had to take ten minutes to attach padded straps about your person. Straps that not only hindered your movement but made the quick transfer of the bike to someone else so cumbersome as to render it unfeasible.

A bike where the number of safety wheels and stabilisers attached to the bike made it almost impossible to manoeuvre on anything but a tiny set of predefined journeys.

A bike where people were employed to follow you around as you rode just to make sure you didn't ride off the edge of a cliff or into some fire. And so zealous were they, in their pursuit of your safety, that they also thought it prudent to also prevent you from riding over bridges or level crossings.

A bike which you were not only forbidden to try and improve or change yourself but that also needed almost constant attention from a mechanic who seemingly always had a queue of people awaiting his attention.

You see how the energy-used to effect-generated ratio had been tampered with there? To the point where a bicycle stops being an effective means of transport. To the point where you might even feel walking was preferable because it's actually not much slower and at least you're able to exert some autonomy over it.

If we're going to make the most of the amazing tools at our disposal we need to do better than this. We need to trust and empower people and allow them to take full advantage of the huge potential these tools bring. Until we do this we will only ever scratch the surface of what's possible.

Will it write? Showing up Evolution for revolution?