I did a talk on Tuesday this week at Bettakulcha. It’s 20 slides in 5 minutes in front of about 300 people at the Corn Exchange in Leeds. I chose to do mine on Magic & Conspiracy Theories. Below are the slides with some notes which are basically either what I said, what I was meaning to say, or what I wished I'd said almost immediately after finishing (particularly the ending which I careered towards and then seemed to crash into before I knew what was happening).

It started with Ivor introducing me with the "two interesting facts" I'd provided for the purpose. Sadly these weren't interesting (seriously I couldn’t come up with anything!) and one wasn't even a fact. Firstly that I was a father of two (this I am, and considering penultimate slide I thought perhaps this would do a little groundwork in case that point got smudged) the second was that I was a big Tommy Cooper fan (this isn't strictly true - I do think he's great but it’s not like a "thing" about me - clearly though it fitted very well with a number of aspects of the talk so I thought it was worth the dubious moral position for the sake of a helpful bit of scene & tone setting). 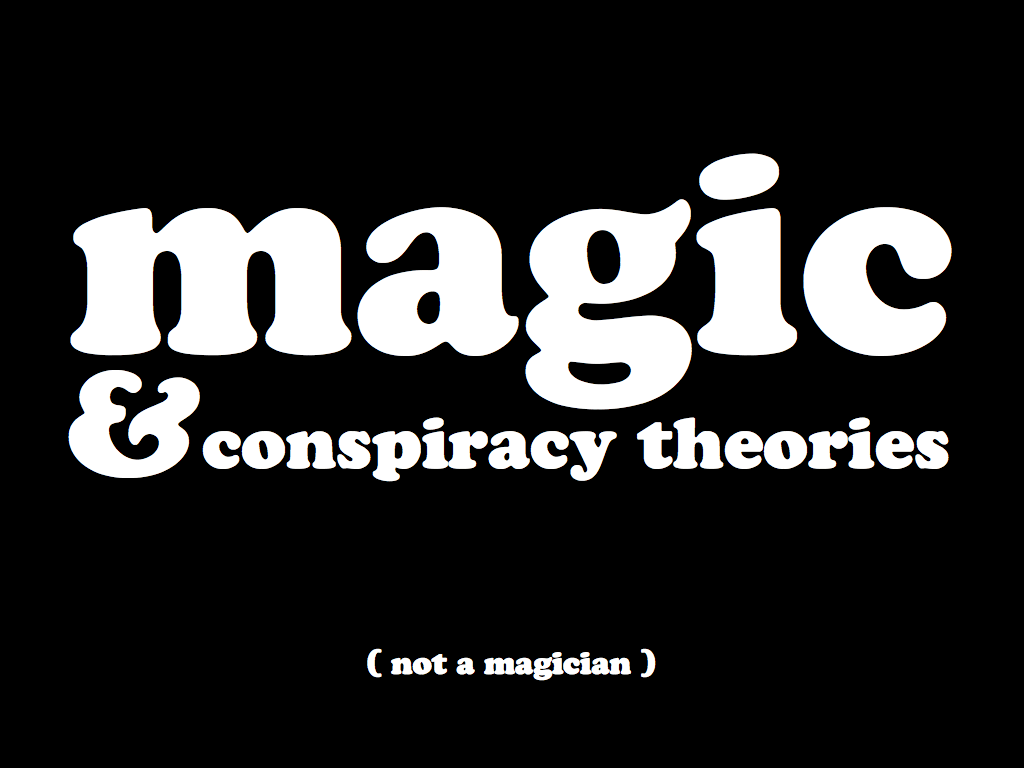 Hello. This is my talk on Magic & Conspiracy Theories. Despite the hat (I was wearing a fez) I'm not a magician. Maybe there's a little disappointment at that, there's probably quite a lot of relief. It’s that kind of feeling which prompted this talk really. I find myself attracted and repelled by these two subjects in equal measure and I was wondering why. 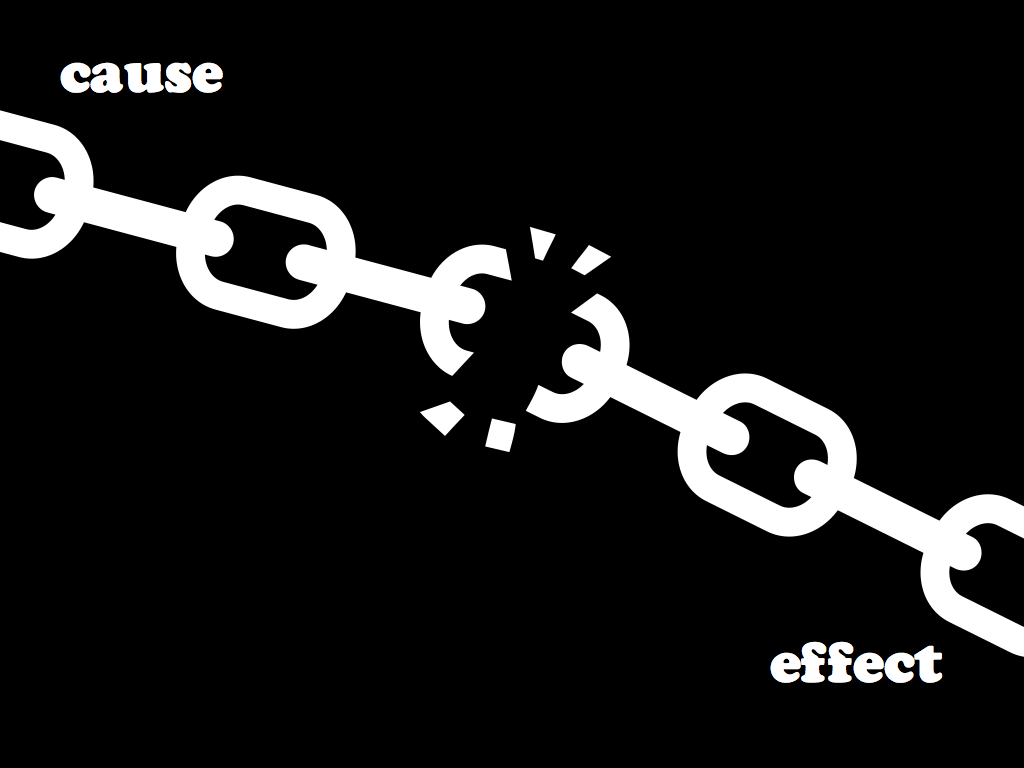 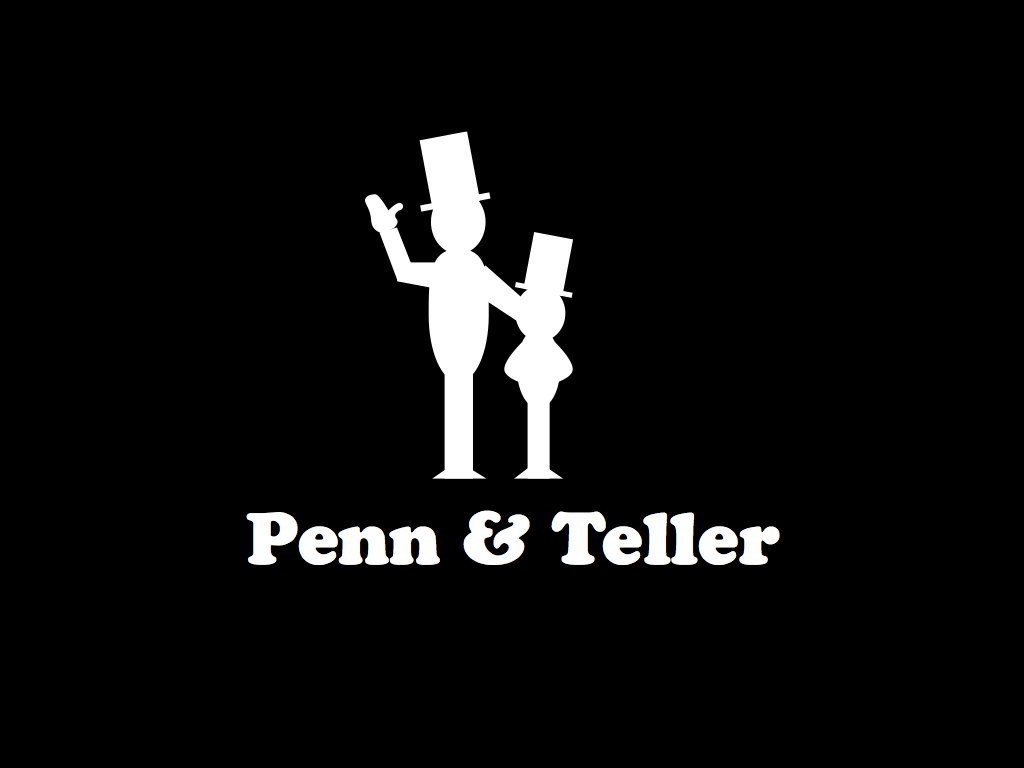 I should really start at the beginning however. In the beginning was Penn & Teller. Two American magician's who, as part of their act, explain to the audience how their tricks were done. I used to watch their show when I was younger and the thing which stood out to me across a number of their tricks was the huge amount of effort they would put in for sometimes a very small magical effect. 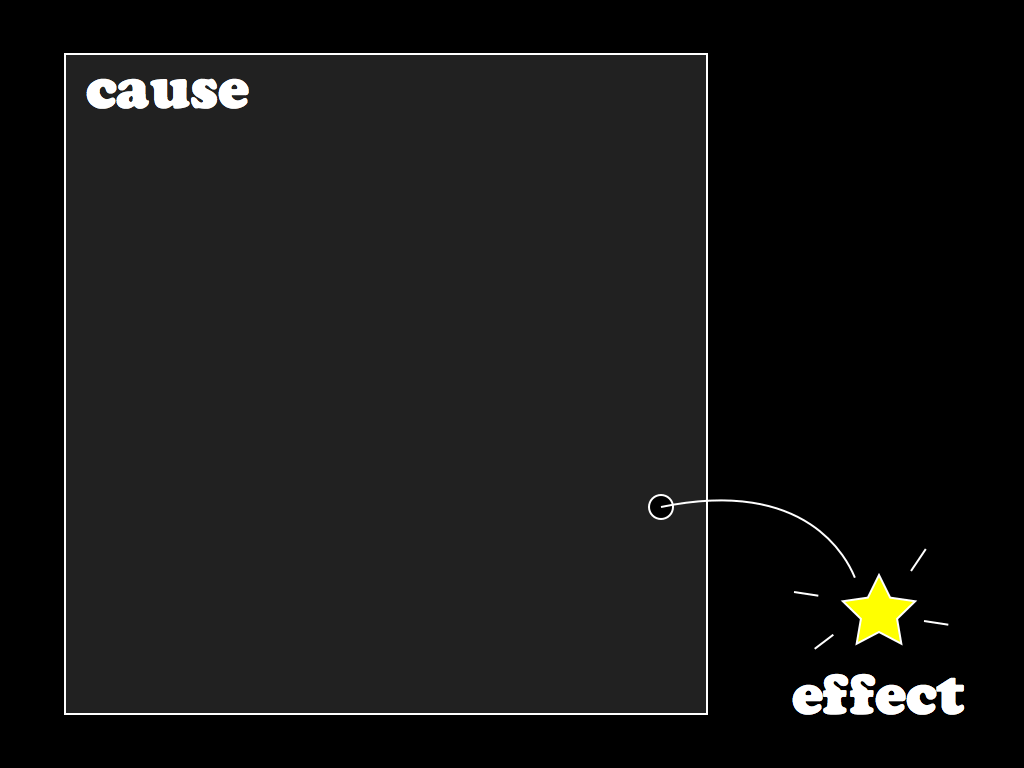 It struck me that perhaps this was, in some way, one of the reasons that the "cause" could get detached from the "effect" in people's minds. Maybe there was something about the size or complexity of the real cause which triggered people to go for "magic" as an explanation rather than imagine their way to the truth. 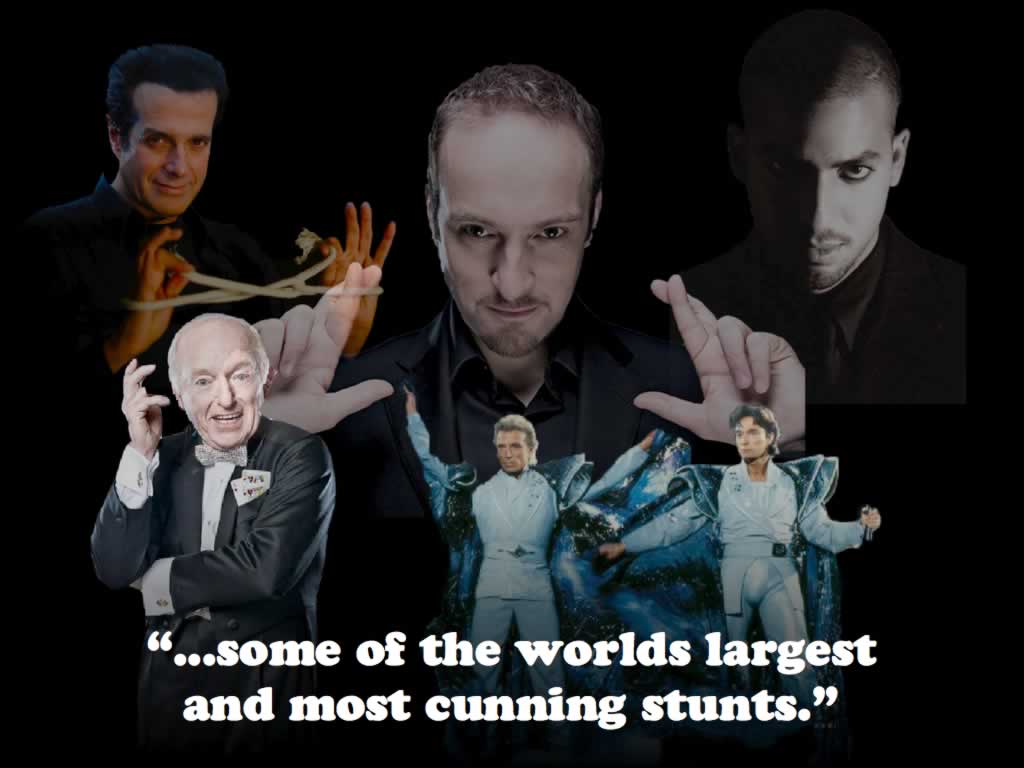 Thinking about this it seemed that a similar theory could be applied across a great range of magic. Whether it was the long hours of practice that would go into perfecting a slight of hand or the huge logistical and organisational efforts that might go into creating some of the worlds largest and most cunning stunts. 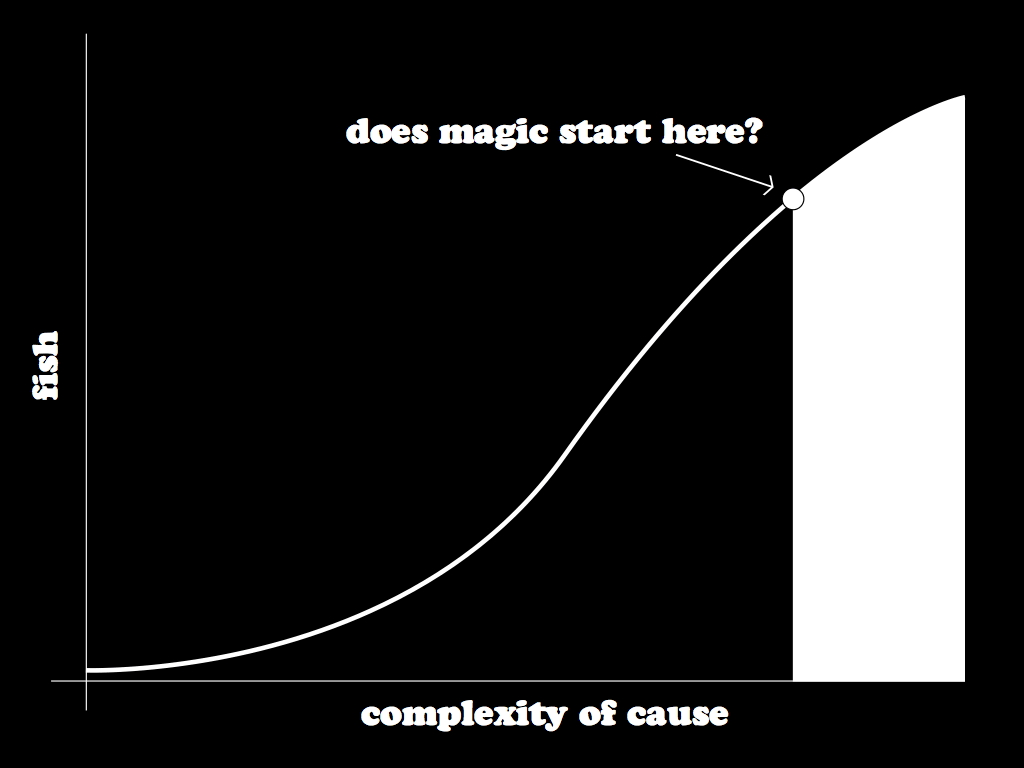 So that led me to thinking that if this was true perhaps you could plot it on a graph and find the point where the complexity of cause actually tips over into an amount which makes an audience blame magic.

(this is clearly ridiculous as witnessed by the fact that the y-axis of the graph is measured in fish - you can try this yourself it doesn't matter what you use - barmy!) 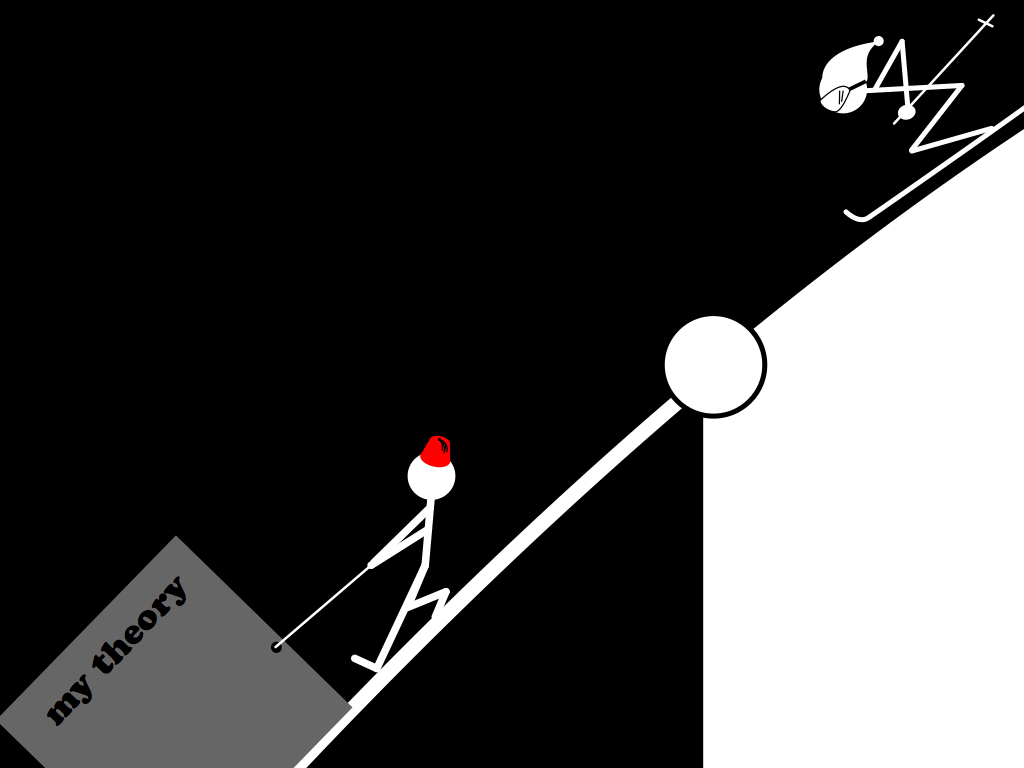 I was dragging my theory up towards this point and thinking about how it might work when I realised there was something coming at me from the other direction and that was conspiracy theories. 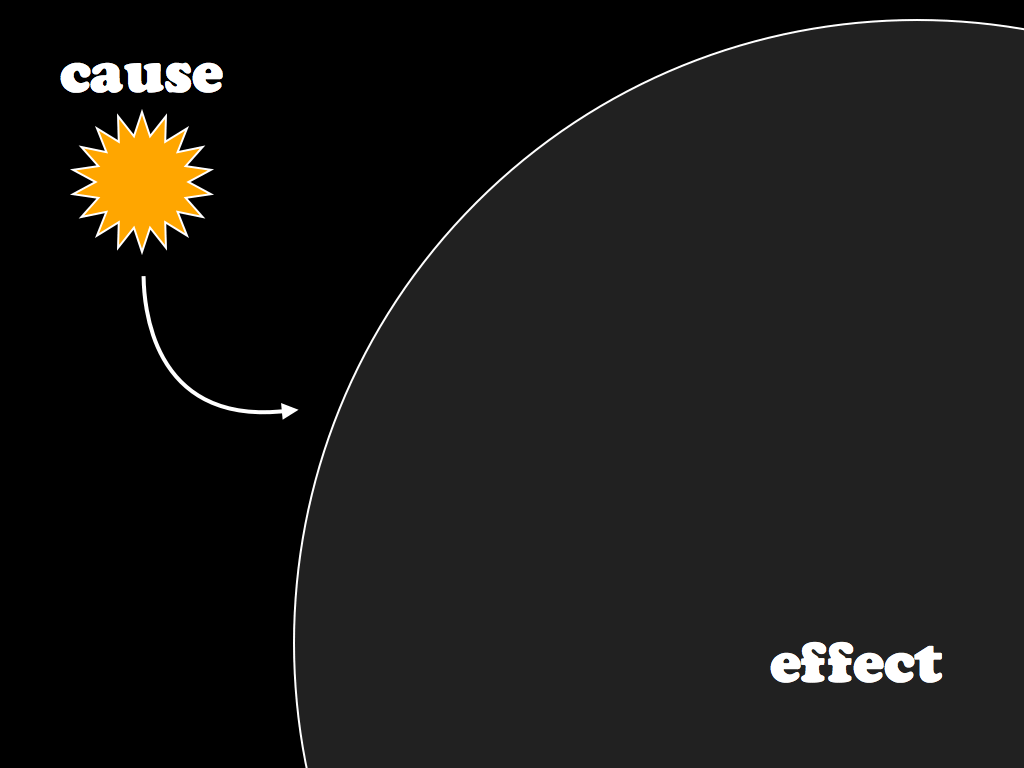 It seemed to me that conspiracy theories work in the opposite way to magic. They often grow up around events which whilst often having huge world-altering effects actually have comparatively simple causes. It almost felt like reason for the link between cause and effect being broken here might be the same (or exactly the opposite) as it is for magic. 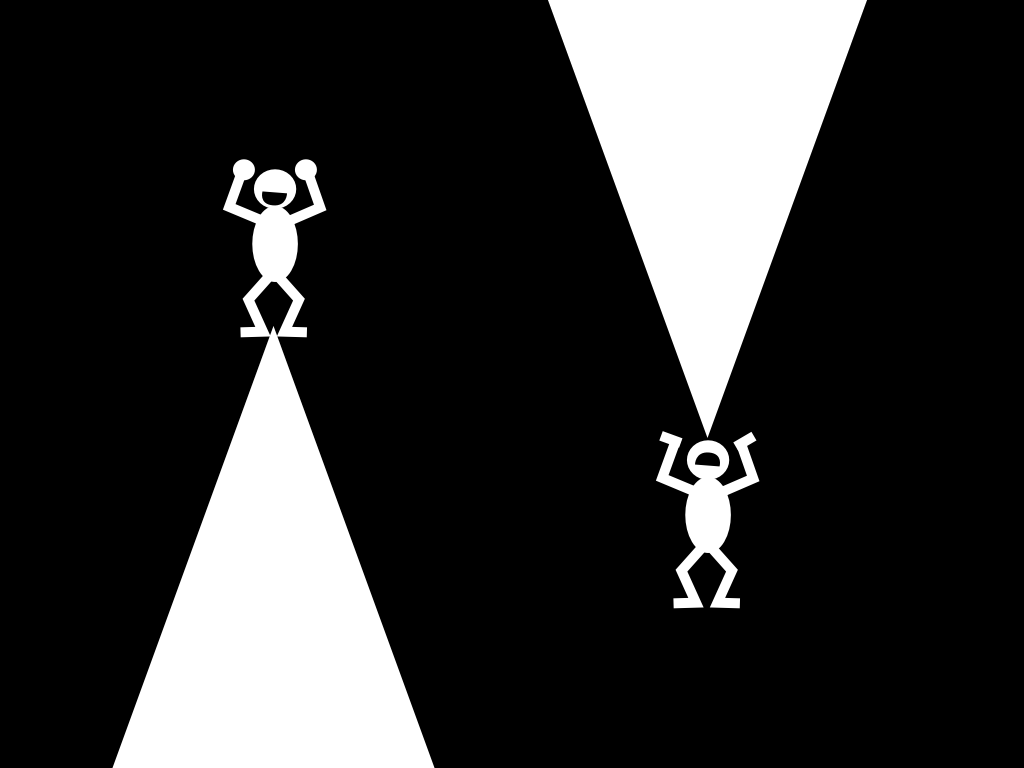 At this point I realised also that they tend to have an opposite effect on people too. Magic tends to give us feelings of pleasure and perhaps delight, where as conspiracy theories tend to cause feelings of sadness and oppression. 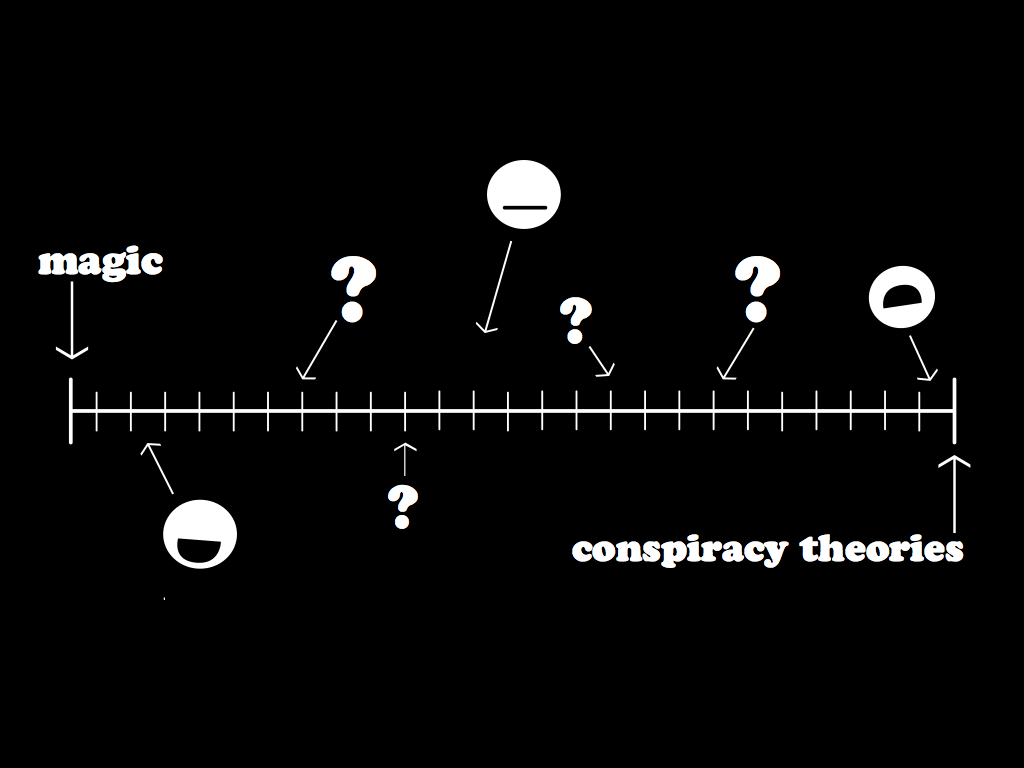 This thought led me to imagine a kind of spectrum. I thought if you placed magic at one end with it’s large complex causes and delightful effects and conspiracy theories at the other with it’s comparatively simple causes and oppressive effects you could possibly plot out all sorts of things in the space between in a wonderful and informative way. 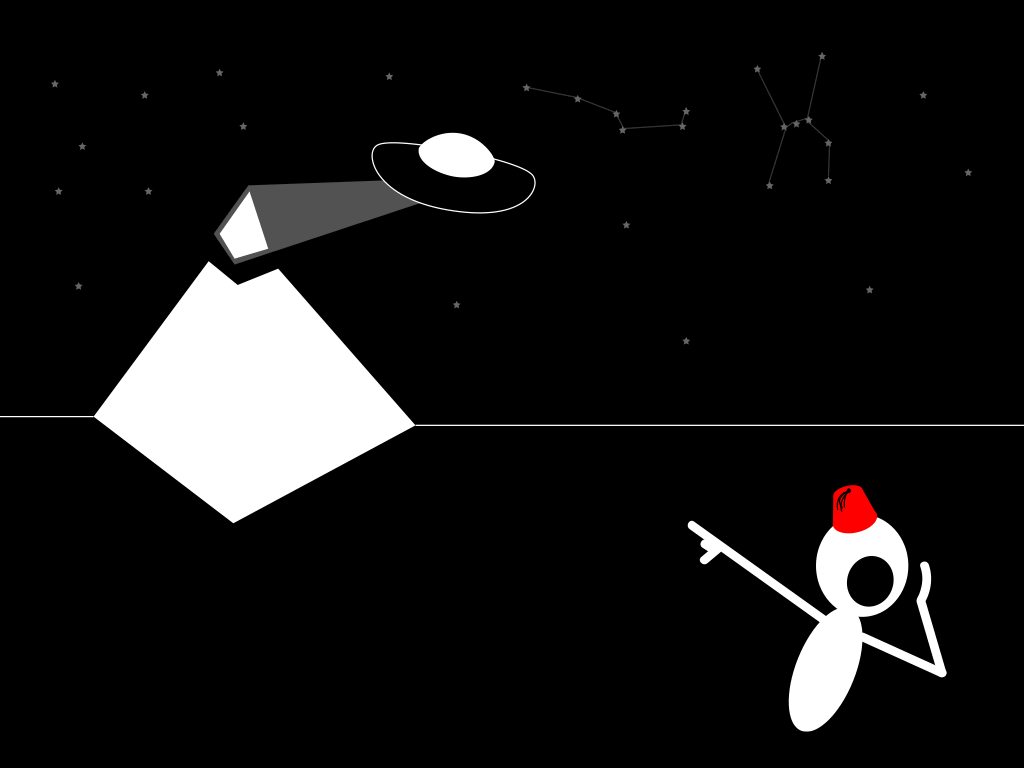 I was feeling pretty happy with myself having made this incredible discovery until I realised there was a problem, and that problem was pyramids. Pyramids: either built by the ancient Egyptians thousands of years ago or built by fried eggs from space.

(I chickened out of making the fried eggs joke on the night - a reference to my poorly rendered flying saucer - as I was beginning to feel that things were racing a bit and I wasn't exactly taking the audience with me. Looking back it probably would have been fine). 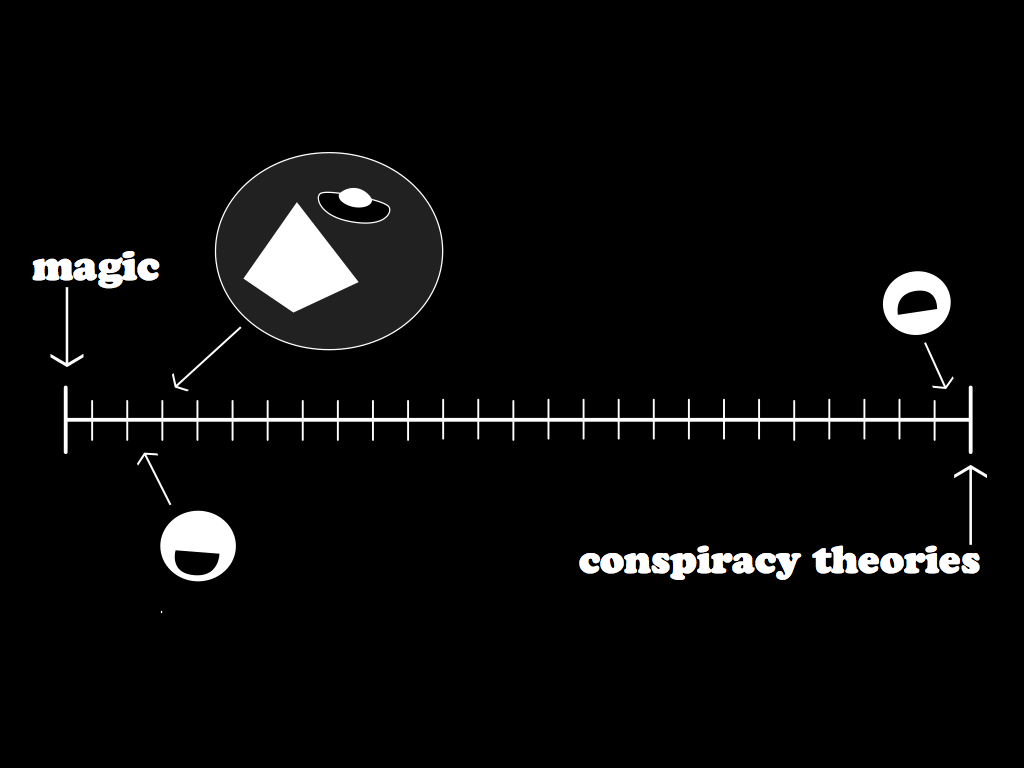 This puts the pyramids theory at the wrong end of the spectrum. The actual cause of pyramids is large, complex and involves a huge amount of effort, where as blaming aliens is actually fairly simple, and more like magic. 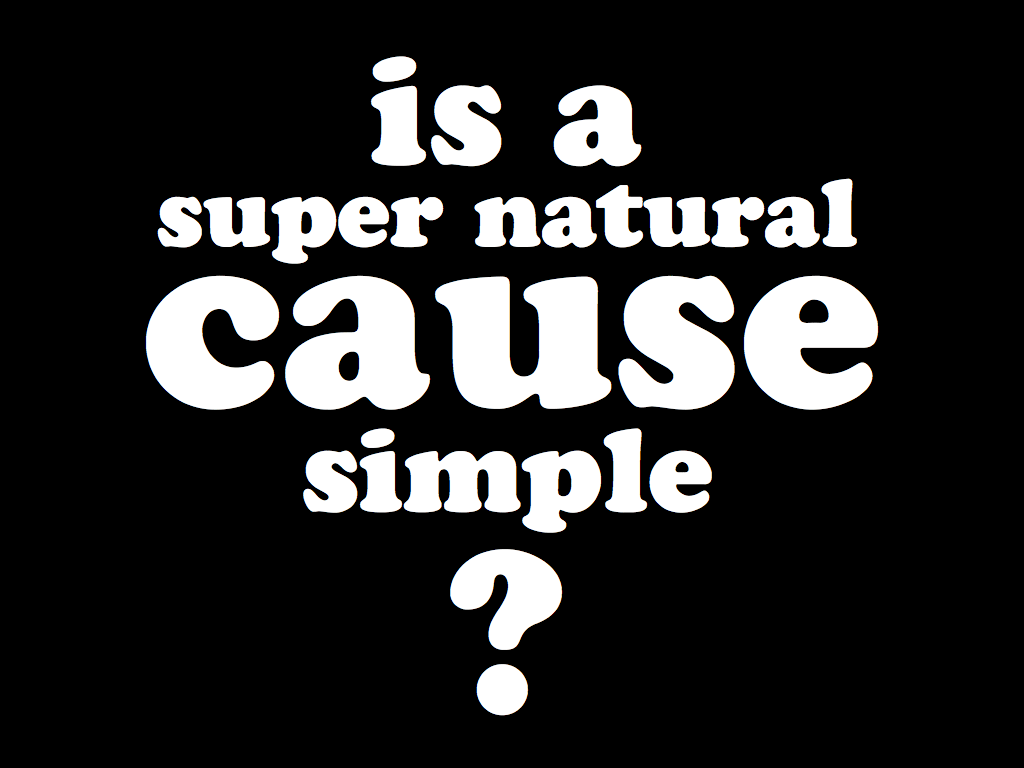 Which lead me to this question. Is the idea of aliens building the pyramids actually simple? Surely, if true, it would have huge and complex consequences for the world. You could hardly say it was a simple explanation. This kind of goes for magic too really. If it was actually true that would not be a simple thing at all. 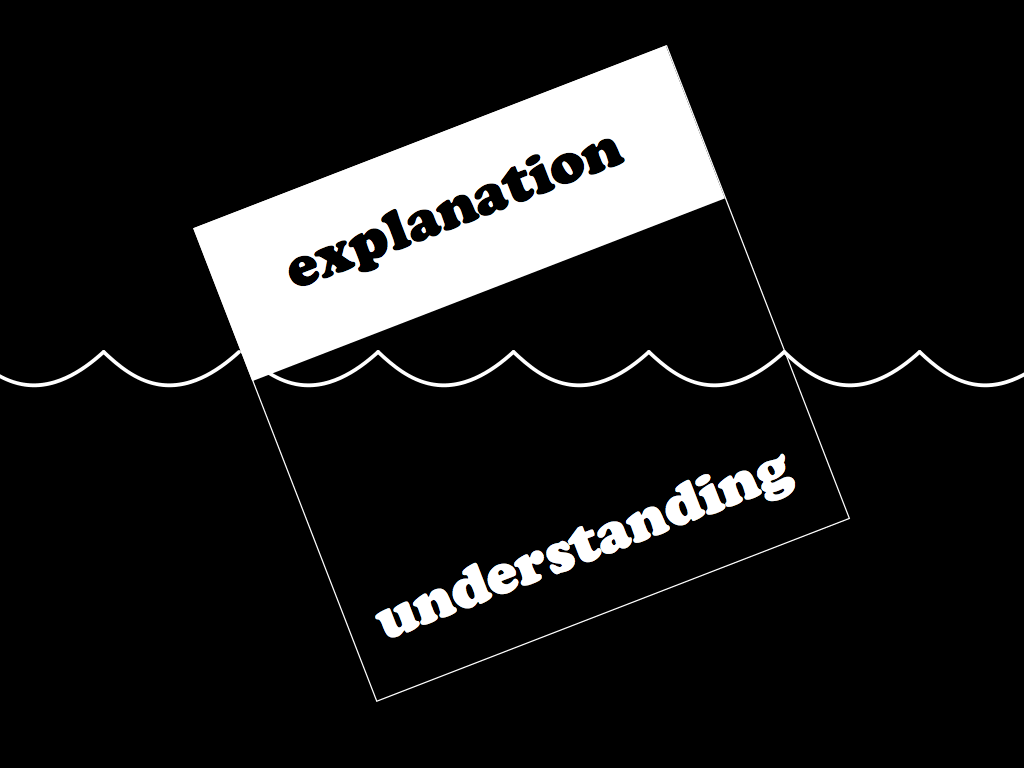 But actually I think there's a sense in which it is simple. What I think I'm really talking about here is the difference between an "explanation" and "understanding". It seems that particularly in these cases an explanation doesn't necessarily need to be based on facts (or real understanding) for it to feel satisfactory to us. 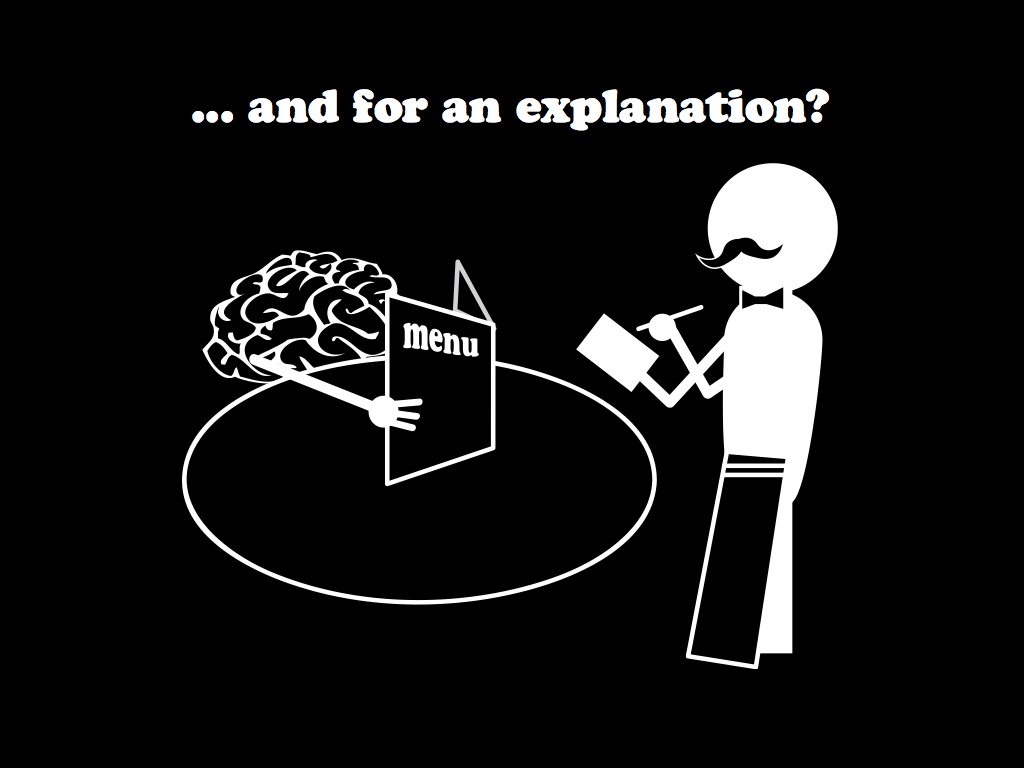 What it seems that your brain wants in these situation is an explanation that fits, but it’s desire for this is so great it kind of overwhelms some of your other (more rational) mental faculties. Like a customer in a restaurant being rushed by an over-eager waiter the brain simply goes for the best available option without taking the time to look for facts or perhaps analyse the evidence more carefully. 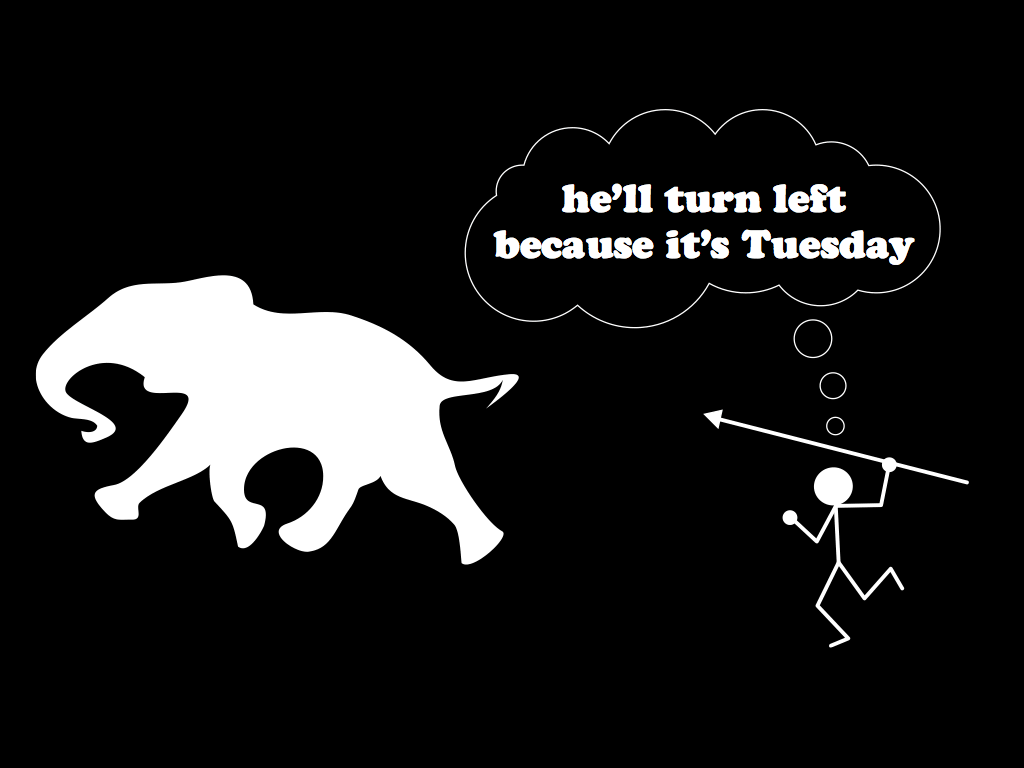 As with most things this probably goes back to some earlier stage of our development when we lived in circumstances where having a quick working explanation for something was far more important for our survival than whether this explanation was based on a real understanding of the situation or on reality in general. Explanations would then grow up around experiences and would never need to be changed as long as they continued to work. 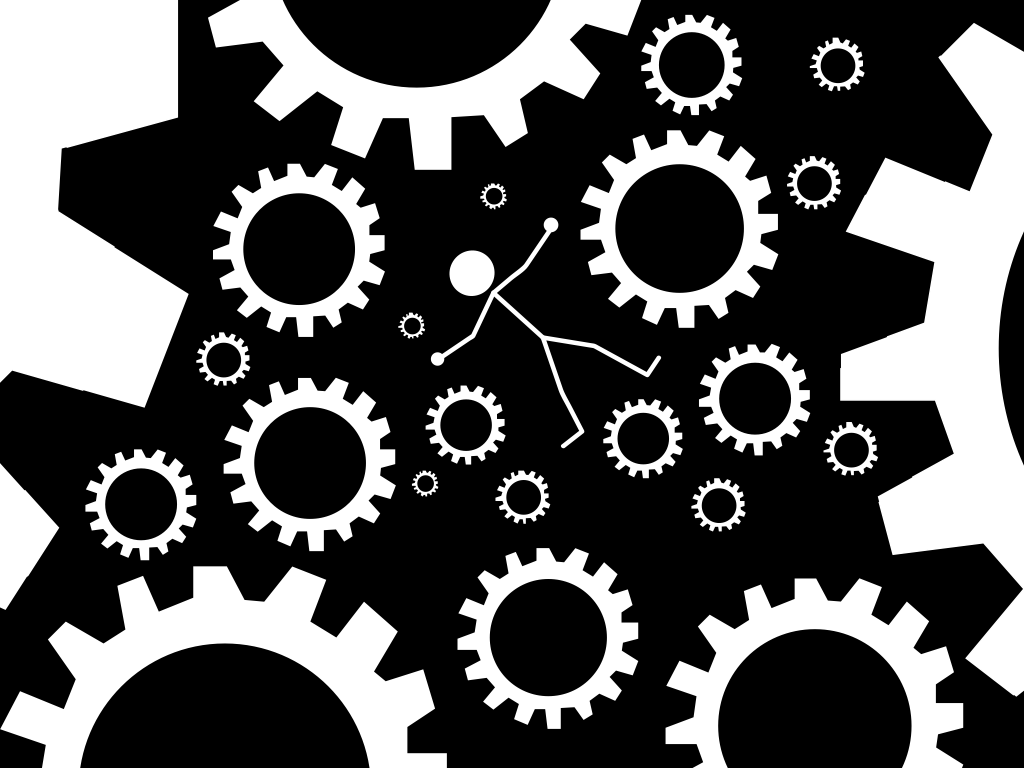 More recently this kind of thing has been superseded by a more rigorous scientific method which has enabled us to really understand the world in a much deeper way. Science itself is based on the same - keep a theory till it doesn't work any more -  approach but because it works so much quicker and more efficiently it has meant that often those explanations which to our brains seem to fit best have been replaced by an understanding which is sometimes less intuitive. 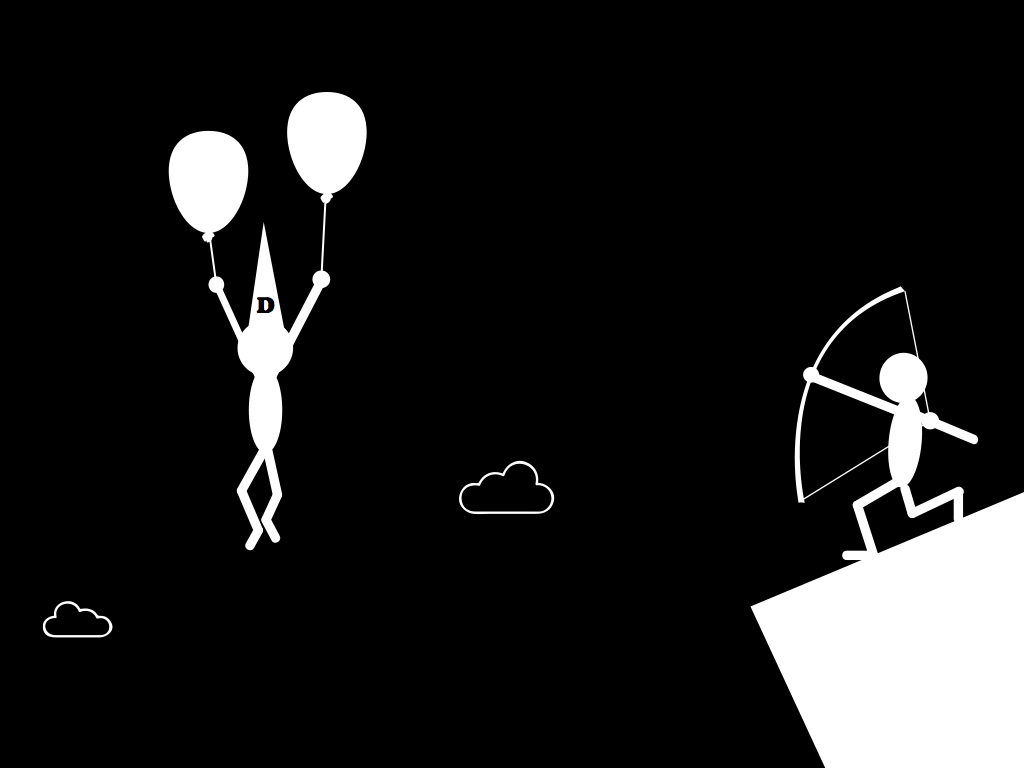 And so I find myself drawn toward these two subject perhaps against my better judgement. Even though I know I'm being fooled and even though I kind of know they can be easily shot down I kind of find myself enjoying going along for the ride. 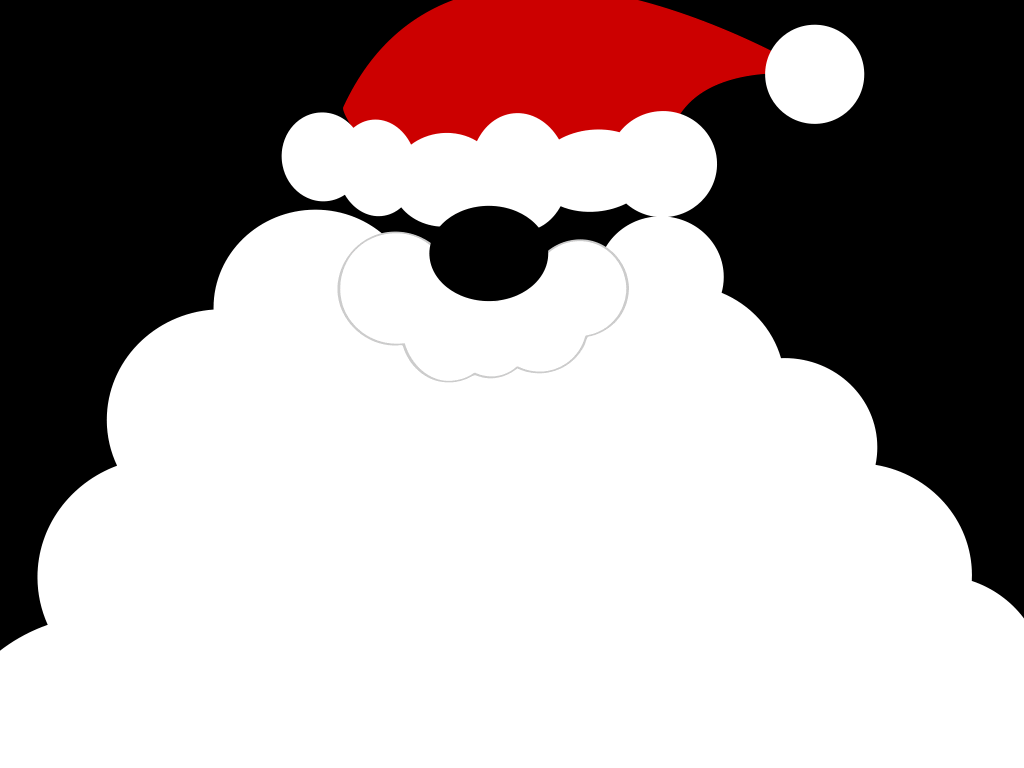 I should point out at this point that I am actually part of a global conspiracy. It involves millions of people world-wide and it’s purpose is to induce a belief in magic into a large proportion of the population. This is done through encouragement of mis-understandings and the occasional use of down-right lies. You could say it is a MAGICAL CONSPIRACY! 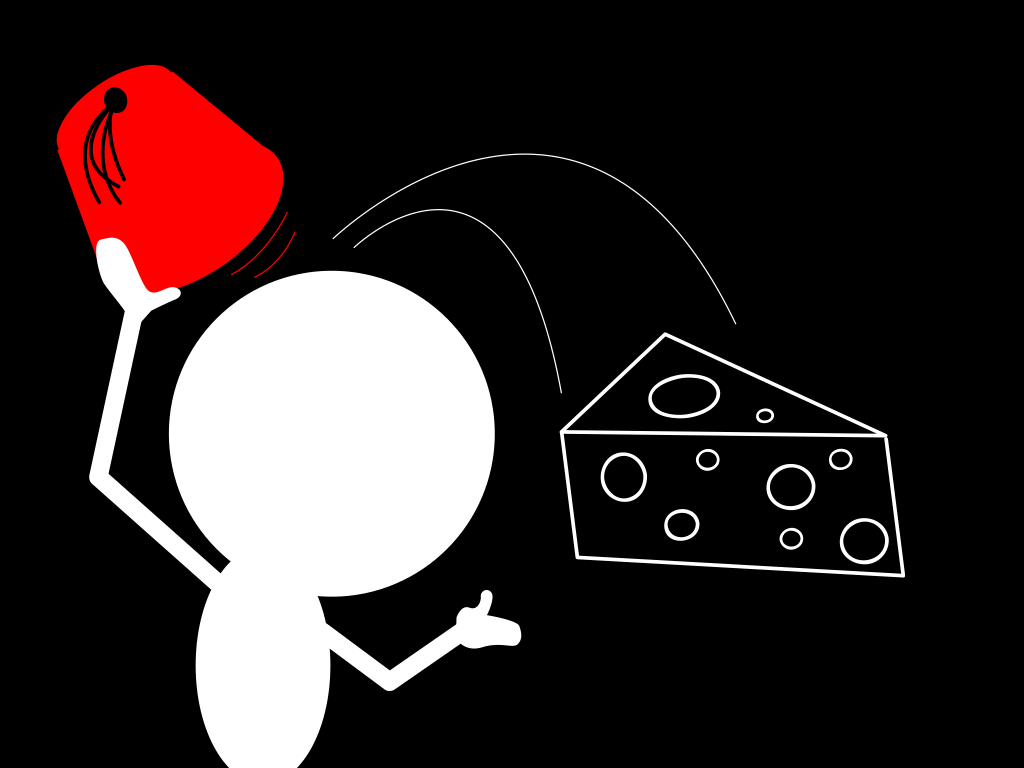 So perhaps magic and conspiracy theories are OK... as a source of entertainment.

And that’s the end of my talk. Like a swiss cheese produced from under a fez, it is from my head and most definitely full of holes. But I hope it was a source of some entertainment too. Thanks.

(I have heavily tidied up the end there. In reality I think I pulled a funny face, mumbled something about that being it, and quickly handed back the mike. Oh well, it was my first time. Maybe I'll have another go one day).

Thanks to Richard Michie and Ivor Tymchak who put Bettakultcha on. The Corn Exchange is a fantastic, inspiring venue for this kind of thing which was wonderful. The other speakers were amazing too, funny, informative, surprising and each of them displaying a sincere passion for their chosen topic which was always infectious. What is so nice about Bettakultcha is that the range of topics covered and the range of approaches is so different you genuinely feel like the atmosphere is entirely accepting and supportive. Whilst much of Tuesday night for me was spent in a haze of apprehension and then a thumping daze of adrenaline I really did have the most fun. I would thoroughly recommend attending as either an audience member or as a speaker.

I’ve collated some of the responses I got on twitter below. Thanks to everyone who tweeted.